Besides Klaus Gutjahr of Berlin, who works on new constructions since many years, the Carlsfeld people is anxious of having back their traditional factory.


The start made Mr. Rockstroh of Carlsfeld in 1997, producing a handmade bandoneon. It was tuned by Dieter Seidel, former tuner of the Arnold factory after the war. With this prototype he could demonstrate to own the necessary know how for building instruments. However, in this case the heart of the instrument, the reed boards, are still original Alfred Arnold's. I had the opportunity to play this instrument and I must say, that besides some necessary mechanical improvements, the sound is quite close to the original.

A further trial was made by Uwe Hartenhauer

of Klingenthal, the big accordion center near Carlsfeld, and who is bandoneon serviceman since a long time, skilled enough to direct a future bandoneon manufacture. Uwe Hartenhauer went to Buenos Aires and Montevideo contacting professional bandoneonists and possible future customers exploring the commercial possibilities.

He noticed the few potential customers would not ensure a fluid production. The actual professionals do not need additional instruments and the youngsters don't have the money for new ones. The needed investment for tools and equipment would raise to about 1 million Deutsche Mark (about 570 000 us$ at the time). Only one tool for one single of the 15 different reeds is about 5000 us$ worth. This would require selling 500 instruments a year to achieve a reasonable price. Using reeds from other providers could circumvent this inconvenience. Or, for at least to demonstrate the sound quality, make the reeds by hand.


Finally, on February 2002, a new octave tuned 142 voice model with zinc reed boards was made using the traditional techniques. It was presented at the Frankfurter Musikmesse on March 13 - 17th at Halle 1.2 Stand E 37.


In parallel a sponsored project of the Vogtländischer Förderverein für Musikinstrumentenbau und Innovation e.V. became public on October 7th 2000, on occasion of the annual Carlsfeld Bandoneon Meeting, where two newly made pupil instruments were presented. They were built by specialists of the Institut für Musikinstrumentenbau Zwota applying the know how of the previous mentioned HARMONA factory. The keyboard design of the 110 voices is based on the Einheitsbandonion, permitting thus to be used by local young pupils like at the introduction ceremony.

The 10 year old Robert Wallschläger and his teacher Dieter Seidel during the presentation ceremony.

In spite of the used aluminum reeds, the sound of the new instruments is quite promising. A short sound check was particularly pleasant for the treble side of the smaller of the both specimen.


Images of the new instruments:

Additionally there is a project running for creating a full sized double reed 142 voice instrument with zinc reed boards. This fact let us expect a bandoneon manufacturing which will finally terminate the expensive search for an adequate old instrument. 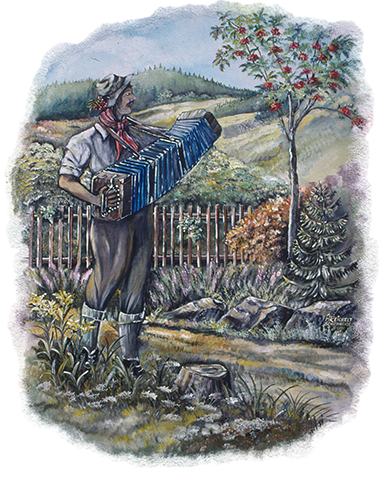 The increasing interest in bandoneons during the last years may be helpful to promote this instrument. The town hall recognized the need of creating a bandoneon museum. In spite of the actual strong economic problems which passes the region, Carlsfeld made it possible to occupy several people working on this task. They collect several specimens and sheet music which is hosted for the moment by the local grammar school which makes it impossible to allow public traffic. After solving the uncertain property conditions of the original Alfred Arnold house which is expected to be the future museum, the new institution may be established.


Meanwhile Mr. Wallschläger built up a small private museum located in Carlsfeld, Hauptstrasse 7, where you can visit his collection. He will give detailed information about the bandoneon history. The front of his house is decorated with a large painting showing a bandoneon player.

Since 1993 bandoneonists from Germany and other countries meet once a year during a weekend in October in Carlsfeld to exchange ideas, sheet music and, of course, play their music. The meeting is held in German, but many visitors from abroad make the meeting international. Martina Zapf of Carlsfeld tells about the 8th Bandonion Treffen in 2001 in German. The 2002 Meeting will take place from October 11th to 13th. For information and hosting please contact: