The bandoneon is a subset of a German Harmonica. Depending on the regionally usage, these bellow harmonicas are called German Konzertina, Bandonion or Bandoneon from the Spanish term. Besides these German instruments there are many other similar, older and newer instruments such as Aeoline, English Concertina, Accordion or Mèlophone. While the first instruments were constructed for single action (worked mostly only on pressure), later instruments with a valve system allowed to play on opening (draw) and closing (pressure) the bellow (double action). The New-sheng and the Apollo-lyra were able to play in both senses. The early harmonikas were diatonic instruments for a few tones. In order to have chromatic instruments with a few buttons, the double action instruments were build bisonor, that is the note changes with the bellow sense. But with the growth of the instruments also unisonic versions with equal notes in both senses became popular.


Although Demian's accordion from 1829 permitted easy accompaniment of folk music and was highly requested, the fixed chords reduced its musical possibilities. The tonal distribution of Wheatstone's symphonium (1826), later known as English Concertina, was thought as a melody instrument to perform e.g. violin parts in concerts.


Carl Friedrich Uhlig designed a layout with individual notes permitting an easy play of chords with it dominants in the opposite sense of the bellow. There are for at least three different of such primitive nucleus zones named according to their creators: Uhlig (Chemnitz, 1835) and Band (Krefeld, 1850) with 56 voices (28 keys) and Zimmermann (Carlsfeld, 1849) (29 keys) and which were designed all before 1856. Obviously these instruments were limited to a few scales and the development went to increase the number of keys. Heinrich Band achieved this by adding later buttons around his nucleus zone of the konzertina. This permitted the konzertina players to change over easily to the new models with 74 to 104 voices. Until 1877 his instruments with 130 voices became common.


Since Band was from Krefeld (Rhine), his system was also known as Rheinische Lage to distinguish it from the very many other keyboard designs. Some people began calling those instruments Bandonium (first in 1854) because of the marketing system. The different systems were regionally different and developed independently. Band's 130 voice keyboard layout was exported also to the Rio de la Plata where it was extended to the 142 voice keyboard layout which is the standard system still today there. The range goes in the bass from C-2 to a-4 and in the treble from a-3 to a-6. Some missing voices like C-2 on closing led to build special versions with 152 voices (about 1912) with the full chromatic scale on opening and closing. In Germany a commission proposed in 1924 to unify the different systems, even konzertina and bandoneon, in order to simplify the edition of sheet music and teaching and to reduce the number of instrument models. The so-called Einheitsbandonion with 144 voices was created. This occurred after the time when the bandoneon was already popular at the Rio de la Plata and where the Einheitsbandonion was not accepted. Since it was not possible to join the konzertina and the bandoneon, a new 124 voice Einheitskonzertina was born.


The high popularity of the bandoneon during the 20ies forced the French musette players to learn this instrument too. But because the available bandoneons were too different from the musette acordion, they demanded an instrument much closer to what they were used to but with the characteristic sound of a tango bandoenon. In 1925/6 Charles Peguri replaced the reedboards of a 142 voice rheinische Lage instrument with modified plates, where the reeds for both air flow directions were the same. The unisonoric so-called Peguri Chromatic Bandoneon is based mechanically on the standard 142 voice export models, making it easy to incorporate the modified version into the running production.

The term Chromatic Bandoneon caused confusion among many people because it suggests that the bisonor instrument doesn't permit chromatic scales, and which is not the case. They simply called double action instruments diatonic and single action = chromatic.

Which system is the most suitable?

To take a decision you have to know the task of your work. The demand for unisonoric instruments arose from the need to change from piano or accordion to bandoneon without having to learn the complicated keyboard and be able to perform within a moderate time.
There are hundreds of bandoneonists in France with excellent results using Peguri's system. Most of the actual bandoneon production goes into that market.

Why then still a bisonor system?

Both instruments sound different although potentially every instrument sounds different. One reason is, that on acting a voice a brother reed of the same frequency in the same wind channel is “hearing” the sound. This fact couples vibration on its own and which interferes with the driving reed. This additional sound is not strong and only modifies the sound colour.

The most important reason is that a bisonor instrument allows to perform extremely broad chords giving the bandoneon its particular rich sound not possible on other instruments.

For the case you are going to play tango music I would suggest the bisonor system since most compositions take advantage of that particular property. Once you have learned the keyboard you will discover the great advantage of the “chaotic” layout. The original idea of realizing chords easily is still achieved. This is to be considered particularly for modern harmonies.

The choice between Einheitsbandonion and the rheinische Lage depends on your repertory, although less significant.

Most older bisonor instruments made in Germany are labeled with numbers and symbols. They where introduced with the first instruments as an aid for learning to play the instrument and identify the buttons. The first instruments with two or three rows used only numbers but when extensions were made the numberings had to be replaced by symbols or combinations of numbers. A new button e.g. located between 1 and 2 was labeled 1/2. The system does not follow a musical sense and was used for the cipher notation called Waschleinensystem (clothes line system) which led to special music editions for bandoneon, thought mainly for musical illiterates. It consisted of the sequence of the key codings on one single line giving instructions about the timing. There are still some old bandoneonists in Germany using the system.
From the next section you may access to some keyboard graphs in which it will be refered to this codings, particularly to explain how the keyboard systems evolved with the time. 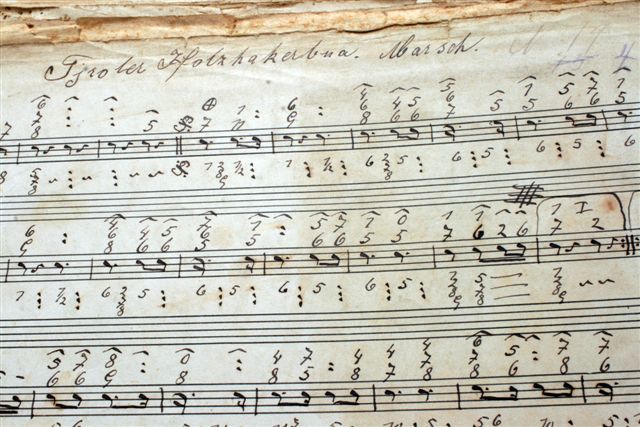 Excerpt of the cipher notation.


Evolution of the Keyboard Systems

Maria Dunkel has analyzed in her book Bandonion und Konzertina the three mayor German primitive keyboard systems, those of


Additionally she identified a fourth system in Bavaria called Münchner Lage, but she could not determine the originator of the basis for the later Schrammelbandonion since there existed for at least 3 different manufacturers during the 60ties in Munich.


The list starts with the first 28 key design having 14 keys (1-14) distributed on 3 rows on each side of the instrument. The indicated key numbers were later extended with symbols (second and third column) and were used to identify the keys for the symbol notation. Later modifications led to an inconsistent labeling, particularly when notes where shifted or modified, or when manufacturers introduced other ideas.

Uhlig's instrument is also known as the German Concertina or Chemnitzer.

A mayor extension of this layout was achieved after 1890 by Max Neubert, Richard Lindner and Max Scheffler. The Scheffler'sche Lage adds and rearranges many keys for 102 or 104 voice instruments.

Band's instrument was known as Bandonion (since 1856) and due to his home town Krefeld / Rheinland the keyboard system as rheinische Lage.


Band was registered as merchant in Krefeld and was not a constructor or manufacturer, he must have ordered his instruments from elsewhere, since in Krefeld there were no manufactures available. There are many indications about his source to be Carlsfeld. After the death of Band in 1860, Zimmermann sold his manufacture to Ernst Louis Arnold in 1864 and left to North America where his traces are lost.