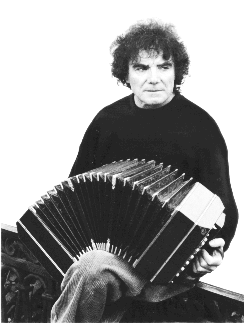 Luis Di Matteo was born on May 10, 1934. He began learning bandoneon as as a child and autodidact and completed later his musical education at the conservatory in his native city Montevideo, Uruguay. His professional carreer began in the 50ies with the Trio of César Zagnoli in Montevideo making recordings for Sondor and Antar Telefunken of Uruguay. He demonstrated a remarcable security in his interpretations following an evolutive instrumental style, particular ideas in composition and surprising variations on the bandoneon.
In 1962 he founded his first own trio with his partners Eduardo de la Puente, piano and Néstor Casco, contrabass acting for tv programmes.
In 1980 he gave his first performances in Europe.
Between 1983 and 1986 he cooperated with the music conservatory of Detmold, Germany.
In 1987 he wrote the music for the swedish filmproduction Black Dawn / Los Dueños del Silencio.
In 1900/91 he took for the first time the opportunity to work and record with a string orquestra. In the russian city of Uljanowsk (Lenin's birthplace) he recorded own compositions with the chamber soloists of the Uljanowsk National Symphony Orquestra.
The premier of his latest major composition Concierto para contrabajo y orquesta de cuerdas (Concert for doublebass and string orquestra), performed by the Montevideo Philharmonic Orquestra, took place in Montevideo in the summer of 1995.


The combination of strings and bandoneon have had a long tradition in South America: during the triumphal career of the bandoneon since the beginning of the century, mainly as the Orquesta Típica (bandoneons, violins, double bass and piano). However, Di Matteo's intensive collaboration with strings denotes a decisive step forward in the developement of bandoneon music beyond the traditional limits established by the tango music finding a form of personal expression that clearly places him within the western music tradition in his compositions for this rather difficult instrument.


Di Matteo has not only been influenced by traditional south american music but also increasingly by classical music, including the modern masters such as Arnold Schönberg. With his compositions for bandoneon and strings he opens our eyes for a new look at the bandoneon's possibilities of expression.